To accurately control process temperature without extensive operator involvement, a temperature control system relies upon a controller, which accepts a temperature sensor such as a thermocouple or RTD as input. It compares the actual temperature to the desired control temperature, or setpoint, and provides an output to a control element. 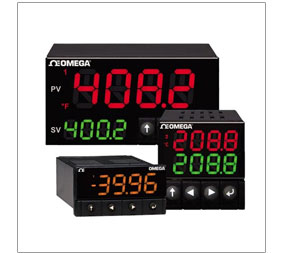 What Are the Different Types of Controllers, and How Do They Work?

There are three basic types of controllers: on-off, proportional and PID. Depending upon the system to be controlled, the operator will be able to use one type or another to control the process.

The third controller type provides proportional with integral and derivative control, or PID. This controller combines proportional control with two additional adjustments, which helps the unit automatically compensate for changes in the system. These adjustments, integral and derivative, are expressed in time-based units; they are also referred to by their reciprocals, RESET and RATE, respectively. The proportional, integral and derivative terms must be individually adjusted or "tuned" to a particular system using trial and error. It provides the most accurate and stable control of the three controller types, and is best used in systems which have a relatively small mass, those which react quickly to changes in the energy added to the process. It is recommended in systems where the load changes often and the controller is expected to compensate automatically due to frequent changes in setpoint, the amount of energy available, or the mass to be controlled. OMEGA offers a number of controllers that automatically tune themselves. These are known as autotune controllers.

Choose the PID controller for your application

On-Off Controllers
On-Off controllers are the simplest type of controllers featuring on-off control action designed to provide the functionality of general purpose PID controller but at a price suited to On/Off applications.

Multiloop Controllers
Each control loop normally consists of one input and at least one output. OMEGA offers numerous multiloop controllers which can handle more than a single control loop. OMEGA's CN1507 can handle up to 7 control loops.

How to Choose a PID Controller?

The controller is one part of the entire control system, and the whole system should be analyzed in selecting the proper controller. The following items should be considered when selecting a controller:

The OMEGA Engineering Singapore office handles all inquiries and orders for India. We have Application Engineers and Sale Support Staff ready to assist you with your technical questions, quotations and orders. A one-stop source for process measurement and control, OMEGA provides support through web chat, e-mail and telephone. View our contact page to call or email us.
PID Controllers | Related Products

↓ View this page in another language or region ↓